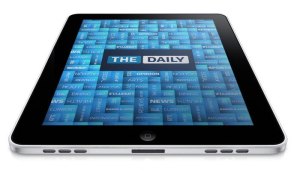 I have been wanting to give my thoughts on the topic of newspapers & magazines for the iPad. This is a very interesting topic to me, for a couple of reasons. 1. I love to read news, always have. 2. I believe that the iPad is an excellent way to consume news. The iPad completely changed the way that I consume news. In my teenage years, before everybody had smartphones and nobody had tablets, I read my local newspaper every day, including weekends. I also read 4 or 5 magazines every month. This is how I got the vast majority of my news. Fast forward to today and I haven’t regularly read a paper magazine or my local newspaper in several years. Between my iPhone & iPad I just no longer have the need. I was an early adopter of the original iPad & from the very start I found several news apps (USA Today, The New York Times, etc.) that I really liked. But I got very excited when on February 2nd, 2011 Apple held a press event for a brand new iPad only newspaper called The Daily. It was made by News Corp, & it was to be like no other newspaper before it. It would be rich with video, real time weather, your favorite sport team’s scores, & could be updated throughout the day. Needless to say I was pretty stoked. It was available for free for around a month or so & I immediately downloaded it. It was definitely neat but it wasn’t without it’s problems. The daily issues themselves were very large files that took a long time to download before you could even start reading, it crashed a lot, and the articles, while definitely passable, never really got in depth as much as I would have liked. Even with these shortcomings, I stuck with it. It was still put together really well. I kept reading all the way through the free trial period and onward. It was $39.99 a year to subscribe & I happily paid it. That was a bargain compared to a subscription for my local newspaper. Time moved on and while they made significant improvements over the next few months, (Downloading the issues in the morning so it would be ready for you when you woke up, making the issues retina quality, etc.) it just wasn’t as good as it could have been I felt. It still regularly crashes on me to this day. So I wasn’t too surprised when on December 3rd, 2012 News Corp announced that they were ceasing operations for The Daily, with the last issue coming out on December 15th. The main reason that The Daily is being shutdown is not because of the few minor gripes I had with it, it’s that is was a huge money hole. The Daily had over 100,000 paying subscribers, yet was losing an estimated 30 million dollars annually. That is crazy. In a world where news is constantly changing and most major stories show up on Twitter within minutes of happening, I’m just not sure that a paid iPad only daily newspaper with 150 highly paid employees and  a 25 million dollar annual cost is the answer. People don’t wait for the news anymore. It’s out there on the internet for free immediately. So while I enjoyed my time with The Daily, I understand that it couldn’t last. That said I still hate to see it go. I have grown very accustomed to reading it every morning when I wake up. So what do I do for news now? I’m not sure that I will ever just have one main source for news anymore. I think I will just use a combination of apps, websites, and social networks from here on out. On the app front I really like USA Today for the basic news. I use ESPN Scorecenter for most of my sports. I also really like Flipboard, both the iPad & the iPhone versions are fantastic. I use Google Reader, Reddit, Buzzfeed, and of course Twitter on the web, & I subscribe to the NextDraft & the Now I Know newsletters, which are both great. I do think that a paid news magazine can make it on the iPad. I look to the excellent The Magazine from Instapaper founder Marco Arment as a good example. New issues are delivered every two weeks. It has a certain target audience that it caters to, is designed extremely well, new issues are tiny file sizes which download in seconds, & it’s only $1.99 a month. It has been very successful and profitable so far. So I do think that certain types of news or magazine apps can be very successful on the iPad. They just need to be realistic with their budgets and (I think) need to have a specific audience in mind. Anyway those are my thoughts on the subject and I would be happy to hear of any other good news sources out there that I could check out.